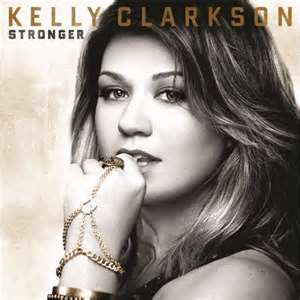 Like many other Americans, I watched the Grammy’s last night. Since the early American Idol days, I’ve been a fan of Kelly Clarkson’s music. And last night her album “Stronger” won the grammy for Best Pop Vocal Album. The album, and single by the same name, were also nominated for Record of the Year, Song of the Year, and Best Pop Solo Performance. The song has become an anthem of sorts for those going through difficult times, especially in the area of relationships, who believe that what doesn’t kill them will indeed make them stronger. And Kelly Clarkson is not the first to sing about finding strength through trying times. Kanye West had a song with the same theme. The saying has also been quoted in the movies Conan the Barbarian (1982) and Steel Magnolias (1989). The philosophy that we are strengthened by the situations we endure and survive originated from German philosopher and poet Friedrich Nietzsche in 1888 and it is a philosophy that many live by.

There is certainly some truth to the concept and there are many who have gone through major crisis situations in their lives that forever changed them for the better. They walked away with a resolve to use their circumstance to reinforce and strengthen their determination that nothing can or will destroy them. Based on the number of life difficulties some of my friends have been through, they should be nearly invincible at this point according to Nietzsche. 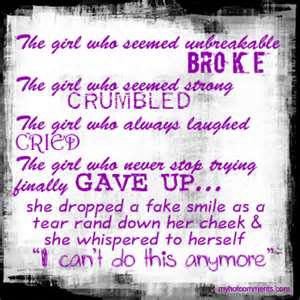 Yet I have come to understand that while that may be true for some, it is most certainly not the case for all. I have encountered those who have lived through extremely challenging situations and the ensuing result is far from strength. What didn’t kill them made them hardened toward life and toward other people. It wore them down to the point that they found themselves no longer fighting their situations, but accepting them as the hand that they’ve been dealt. In some cases, what didn’t kill them has left them broken and mistrusting of others. It has made them bitter and closed off to the love and acceptance offered to them by those who attempt to reach out. What didn’t kill them has worn them down to the point that they are simply enduring life instead of living it. It has left them hopeless, weakened and lacking the will to fight through their circumstances. What didn’t kill them has nearly destroyed them.

I believe there is danger in looking to life’s difficulties for strength. When we do so, we come to rely on ourselves to get us through the hard times. And while there are those who seemingly are the exception, the majority of us need something so much more than our hardships to find strength. After a series of hard times early in my own life, I found myself beaten down and defeated. I was angry and resentful that I didn’t have it as “easy” as everyone else seemed to. My marriage was added to a list of personal failures and I was left feeling weak and hopeless. It was during that low point that I turned to God, who had been waiting for me all along. I sought God at my weakest point and in that moment I surrended control of my circumstances to Him. And when I turned the fight over to God when I no longer had any fight left in me, my life was forever changed. For me, my strength was never found in that which did not kill me. My strength was found in Christ. 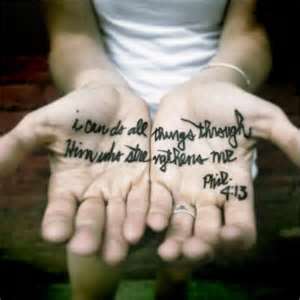 I found that when life gets hard and I feel beaten down, I find such hope in knowing I no longer must rely on my own strength to fight the battle. The battle belongs to my Lord who is my strength and my shield (Psalm 28:7). I trust in Him to be my strength and the bible promises that “those who trust in the LORD will find new strength. They will soar high on wings like eagles. They will run and not grow weary. They will walk and not be faint” (Isaiah 40:31). What didn’t kill me taught me that I can do all things through Christ who strengthens me (Phil. 4:13) – not through the challenges I face, but through Christ. In 2Cor. 12:8 Paul asked God to take away a hardship he faced and God told him “My grace is sufficient for you, for my power is made perfect in weakness.”

In recognizing his source of strength, Paul concluded: “Therefore I will boast all the more gladly about my weaknesses, so that Christ’s power may rest on me. That is why, for Christ’s sake, I delight in weaknesses, in insults, in hardships, in persecutions, in difficulties. For when I am weak, then I am strong” (2Cor.12:10). 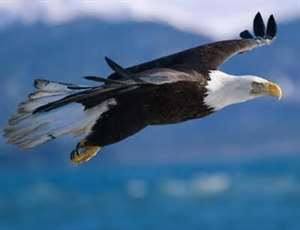 It’s no easy feat to “delight” in our weaknesses, hardships and difficulties. But when we find our strength in Christ and not in how well we endure what life throws our way, there comes a point when we realize that finding delight through the tough times by relying on Him is a whole lot easier than relying on our own strength. We were never meant to fight alone. We were never meant to struggle through life in attempt to barely crawl across the finish line when our life is over. We were meant to soar on the wings like eagles!

What have you been through that hasn’t killed you but has made you battle weary and broken? Are you ready to surrender the fight to God and lean on Him to give you the strength to carry on? In battles of war, surrender is a sign of weakness. But in the battle of life, surrender is strength. Isn’t it time you wave the white flag?