I can’t begin to tell you how many times I’ve told others “don’t focus on your situation. Keep your focus on God and trust Him to take care of everything even when you can’t see any changes occurring. He’s working behind the scenes in ways we can’t imagine. Just trust Him.”

Recently we had our home for sale. We felt certain it would sell quickly  and the activity when we first listed the home confirmed to us that we’d have it sold in no time. The initial excitement quickly faded. People quit coming to look and no one was taking flyers from the “for sale” sign. And so it began. I started to doubt that it would ever sale even though I knew that we had prayed about it and we were certain that God had put in our hearts the desire to move. When there was activity I trusted God to work it all out. But as soon as the activity ceased, I began to doubt. I began to focus on what I could see (which wasn’t much at that point) and took my focus off of God. 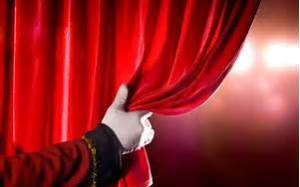 Have you ever worked the curtains for a theater production? My son is an actor so as a stage mom, I’ve done my share of opening and closing the stage curtain. The job itself gives you an interesting vantage point. As you stand just offstage you have a unique view of what’s happening on both sides of the curtain. On one side you can see all the stagehands running around quickly and quietly backstage setting up the next scene and the actors hurriedly taking their places before the curtain begins to open. It’s ordered chaos as everyone works as fast as possible to make sure that everything is perfect when you begin to pull the rope. 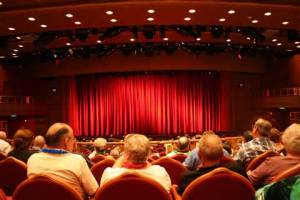 On the other side you can see the audience. They sit patiently and quietly waiting for the next scene to begin. They can’t see anything happening and they really have no idea everything that’s going on just beyond the curtain. But they trust that when that curtain opens, everything will happen just as the program they hold in their hand has promised it will. They can’t see what’s going on behind the scenes but they don’t sit in their seats thinking “we might as well go home because the play isn’t going to happen.” They know that even though they can’t see it, it will happen but only when everything that is going on behind the scenes has been perfectly set into its place.

Oh how I could have used that reminder when we were selling our house. When I couldn’t see anything happening I failed to remember that God had everything under control. That He was working behind the scenes, setting everything into place so that when the right moment came, the curtain would open and His perfect plan would be revealed.

One Sunday after church we were fixing lunch when someone rang the doorbell. I went to the door and there was a couple there. They asked if we would be willing to show them the house. The lady began to tell me that she had been looking at our house online for weeks. She had seen it as soon as it was listed and it was exactly what they’d been looking for. They hadn’t had a chance yet to come by in person because they lived out of town. She said she had looked at it online every day until that day and couldn’t wait to see it in person. Within three days of the showing, we had come to an agreement and they bought our house.

God was working behind the scenes. Even when I couldn’t see anything, He was at work orchestrating the sell of our home. I couldn’t see what was happening so I wrongly assumed that meant nothing was happening. I was focused on the lack of activity and my very limited ideas for a solution. I should have been focused on trusting God and believing that He can work things out in ways I could never imagine. It was a reminder (one of many in my life) that God is in control. Our job is not to figure out how things should happen or when. Our job is to trust Him and believe Him when He reveals a promise to us.

What has God promised you that, from your vantage point, doesn’t look like it’s going to happen? What is it that you have lost hope in? The problem may simply be that you lost focus – you’re eyes are focused on the situation and not on the One who is in control of it. Refocus and trust that there are things going on behind the scenes and when everything is in place, the curtain will open to reveal God’s perfect plan for you.