I began this particular journey about 5 years ago. It began like most journeys God has sent me on with a little apprehension, a little uncertainty of what lie ahead, a little curiousity as to how long the journey would last and a lot of expectation as to what God would do through this new journey.

It wasn’t long into the journey that I realized this one was not going to be an easy one. In January 2008 we moved my grandmother in to live with us. She was 96 years old at the time and in remarkably good health. She was pretty self-sufficient and the change to our lifestyle was minimal. That all changed pretty rapidly. Her health remained good for her age, but her expectations increased a lot. At first it was not that big of a deal. After all, she was my grandmother who I love dearly and I wanted to make this final season of her life as comfortable and enjoyable as possible. But the more and more that was required and expected of me, the more difficult the journey became.

I found myself becoming resentful toward what I began to see as unrealistic expectations. I struggled to continue the journey without an attitude, especially when I felt everything I did was not appreciated and was never enough. The more the journey impacted my lifestyle and my family, the more my resentment built.

I began to question God as to why He sent me on this journey. I wanted to know when it would end. Don’t judge – I’m just being honest because this is truly one of the hardest things I’ve ever done. I wondered what lesson I could possibly be missing that God was trying to teach me. Oh, I knew the obvious ones – patience, serving others with no expectation of anything in return, doing all things as unto the Lord, obedience, praising God through the difficult times – but I just knew that there was something I was missing. I knew I was right where God wanted me to be, yet I became frustrated and defeated because I just couldn’t seem to change my attitude no matter how much I prayed about it.

God certainly encouraged me along the way with special encounters with complete strangers who had also been caregivers. Each time I experienced one of these chance meetings I walked away with a renewed resolve to stick it out until God showed me I had reached my destination and the journey was over. We also had opportunities to go on vacations over the past 5 years that allowed for a time of rest and rejuvenation to continue on. But in the past 6 months, more often than not, I found myself dealing with emotions that were not Christ-like and left me feeling ashamed.

Shortly after Christmas, Sissy (that’s what we call her) fell in her room. We took her to the hospital but they soon sent her home after finding no broken bones. She began having difficulty sleeping, was in constant pain and her health seemed to be declining. After a second fall, we decided together that it may be time for her to be in a place that would be better equipped and trained to care for her. I began to look at different facilities and prepare for the end of the journey.

I quickly found that moving Sissy into a long-term care facility was not going to be an option based on a lot of different variables. I surrended to the fact the journey was not over and in reality, there was no end in site. Once again I felt deflated because I thought I had reached the end of a difficult season only to realize it was not only going to continue, but was going to continue indefinitely. 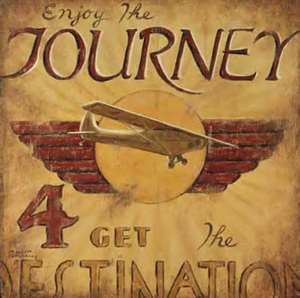 I began to pray once again for God to give me the strength to continue on the journey He had set before me and to help me to have a Christ-like attitude in caring for Sissy. A few days later I was doing my typical routine of checking email/Facebook/Twitter when I came across a link to an article on Twitter. It was an interview with Amy Grant, a Christian recording artist, who was caring for her aging father. She talked about the challenges of being a caretaker and the abundance of emotions you experience. But then something she said “clicked” with me. She said there’s no map for this kind of journey but it may be the last lesson you learn from your loved one. My heart began to change and I stopped looking for what God was trying to teach me and began to focus on what I could learn from Sissy.

Within a few weeks God began to open doors for the journey to come to an end. Even though I clearly knew God was orchestrating everything that was happening and I saw that the opportunity was there for my prayers to be answered, for some reason I questioned if I really had reached my destination. I had gotton comfortable in my difficult situation and no matter how much I had longed for it to end, when God did open the door for that to happen, I did not immediately step through. It’s funny how sometimes the very thing we pray for, is the thing we hesitate to receive when God offers it. And when we hesitate, we miss out on the fullness of blessing found in His perfect timing.

In my hesitation, I realized I felt like I had not completely “got it” and that I still needed more time for my heart and my attitude to be completely right. Then one day in Sissy’s room while I was kneeling down before her putting her socks on her feet, God whispered “I see your heart, the journey is over. You’ve reached your destination.”

On March 1st Sissy will be moving to a small, privately-owned assisted living home. She is looking forward to being somewhere offering around the clock  care and to meeting new friends. She knows the time is right for this next season of her life.

Are you on journey or in a season of difficulty that you wish would come to an end? Or perhaps God is bringing to an end a season you’ve been in – even a comfortable and good season yet you may sense that He’s telling you it’s time for it to come to an end? Don’t question the end of your journey, God just may be preparing you for your next great journey in life. Trust in His timing, you have now reached your destination.