One of my favorite radio hosts of all time is Jim Rome. He’s the host of a syndicated sports talk radio program and has also hosted a sports TV show on ESPN. He is probably best known for the quirky phrases he uses regularly on his show. One of the funniest is when he says he’s “going in the basement ” in place of saying he is going to be on vacation. Going in the basement simply means he wants to get away from everyone and will be unavailable until he reemerges from the so-called “basement”.

One thing I’ve noticed in people is their tendency to “go in the basement” whenever they believe they’ve disappointed God. They believe they cannot return to church, their small group or communicate with other believers because they’ll be judged. So they respond by isolating themselves from the very place and people who they should be running to, not from. The bible says “for all have sinned and fall short of the glory of God” (Romans 3:23). The word used is all, not some, but all. But when we sin the enemy wants us to believe that we are the only one who is not living a holy and perfect life. We shy away from the fellowship of other believers because we wrongly think that they will know what we’ve done and will judge us. We also falsely believe that we must perform a certain way for God and that if we don’t measure up He will not love us anymore and we will no longer be close to Him. Once you are born again you are never separated from God. You may feel separated because of sin in your life but you are never really separated from Him. But so many people believe the lie of the enemy that says “if you don’t behave the way God expects you to then God will disown you” so they isolate themselves, hide from God and won’t come back to church out of fear of being judged. There are no guarantees that there will not be those who may pass judgement because believers are called to judge fellow believers (not unbelievers) by their fruit and to hold them accountable in love and grace (Matt. 7:16-20, John 7:24, 1Cor. 5:12-13). But the response to that form of judgement is not to run from everyone. It’s a good thing that there are those who want only God’s very best for your life and who will help you to return to rightstanding with God. The church is filled with Godly men and women who understand they are not in a position to judge as they themselves are sinners too but are willing to share their wisdom and experience with new believers.

The “basement” is a dark and lonely place where we isolate ourselves from the encouragement, accountability and life-giving prayer and support of fellow believers. And this is exactly where the enemy wants you to be. If you ever watch animal shows on National Geographic you’ll notice that the animals travel in herds or packs. They do so because there is safety in numbers. The same is true for us. There is safety in the accountability and support of the local church and spiritual family. But when the predators attack an animal herd, their strategy is to isolate an individual from the group. They do so because the individual that is separated from the group is a much easier target to take down than when they are connected to the rest of the herd. Typically it is a weaker, younger animal that tends to separate from the group because they lack the experience and knowledge on how to safely stay with the rest of the herd. The enemy of our souls seeks to isolate us from our spiritual family because he knows we become an easy target when we are on our own without the support and help of a group of believers. And he targets the newer believers who have not yet had the opportunity to firmly lay the spiritual foundations in their lives that will give them the knowledge and experience they need to know how to call on others and to use the tools God provides for us during a spiritual battle (Eph. 6:11-18). Because they are a target of the enemy, it is even more vital for newer believers to run to God and their spiritual family when they battle sin and to firmly resist the temptation to remain isolated and alone. 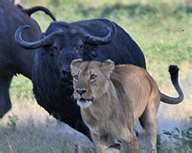 If you feel separated from God the first thing you must realize it that you are not, you only feel that way because of sin in your life. You will never be perfect and you will continue to make mistakes along the way. You must accept that. But you don’t have to stay that way. And you can be assured that God’s love for you is not performance based. You do not have the ability to make God not love you. And you can never do anything so great that God will love you more than he does now. Likewise, you can never do anything so bad that He will love you less. His love for you is immeasurable and it will endure forever so stop trying to make Him love you more and stop believing the lie that He loves you less because of something you’ve done. When you sin your response must be to repent and turn away from that sin. Then you have to get out of the darkness of the “basement” and back into the light of God’s house and fellowship with other believers. You will find protection, encouragement and support when you are firmly connected to other believers through the local church. In spiritual family you will find people willing to stand alongside you and to battle the enemy on your behalf through prayer as they help you bear the weight through difficult seasons. It’s time to emerge from the basement and reconnect with the God who never left your side by returning to church and the fellowship and support of other believers. You weren’t created to battle alone so now’s the time to stop trying and rejoin your herd where you’ll find there truly is safety in numbers.