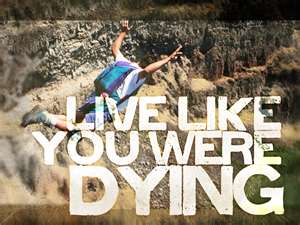 Several years ago Tim McGraw released a song called “Live Like You Were Dying” from his album by the same name. The song reached number one on the charts and earned McGraw a Grammy.  The message of the song was simple – live each day as if it were your last. Do the things that you always wanted to do, make amends with anyone you still hold a grudge against, show love to those who you hold most dear, and spend more time with God. Each of these suggestions are definitely things we all should be doing whether we are dying or not. But what if, instead of living like we’re dying, we chose to simply live like we really believed that when Jesus died on the cross He didn’t just die for our sins, He overcame the power of sin in our life?

Many people today say they believe in God and they believe that Jesus died on the cross for their sins. But the worry, fear, doubt and perpetual cycle of  sin in their life says they believe something very different. Still others are filled with guilt and condemnation because they don’t believe they are good enough for God to love them even though they have received the gift of salvation. The problem for both is that they haven’t reached a point of understanding the full extent of what Jesus did the day He died on the cross. They believe He died for their sins, which is vital for salvation. They also believe that all their past sins have been forgiven. But what they fail to understand is that when Jesus died on the cross, He not only died for all of their sins, He overcame sin. 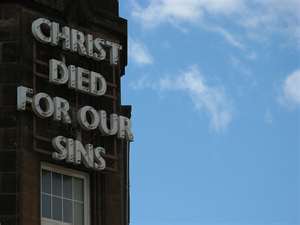 As believers in Jesus Christ, we know it is not up to us pay the price for our sins. The price has already been paid and it only needed to be paid once. There is no need for anyone to keep paying the price. It is finished. When we accept God’s forgiveness of sin, it is erased from our life along with the power it has over us. We are set free from the bondage of sin and the power it weilds over us. But for many, they live their life as if sin still reigns over them. They walk down the aisle of the church to the altar, respond to the gospel and receive the forgiveness for their past sins. Then they attempt in their own strength to make changes in how they act so they won’t sin anymore. At that point they are simply practicing behavior modification when they should instead be surrendering their lives to Christ and trusting in His power to overcome sin in their life. Once we are saved, we are never separated from God. But those still trapped by the guilt and condemnation of past sin feel the separation that sin causes and for this reason many end up turning away from the church. They believe that as long as they behave a certain way they will be close to God but when they don’t behave “right” they feel as if they are separated from God, even though that’s not true. They believe God and other believers will no longer accept them because they have failed. They wrongly believe that they are the only ones who have done anything wrong and that everybody else has it all together so they choose to isolate themselves. And it’s in their isolation they become an easy target for the enemy. The message of the gospel is not about doing all the right things and being a good person so God will accept us. It is accepting God’s promise that we are forgiven once and for all and trusting in Him and the power of the Holy Spirit to change our sinful nature and transform us into His image.

However, knowing our sins are forgiven – past, present and future – does not give us free reign to go sin because we won’t have to pay the price for that sin. What it does do is give us confidence in knowing that no sin – past, present or future – has any power over us. We are free from the control that sin once had in our life and from the guilt and condemnation it made us feel. We do not have to live in fear that we will disappoint God. In His eyes, we are white as snow because our sins have been washed away by the blood of Jesus. We do not have to isolate ourselves when we do fall short because there is nothing that can separate us from God once we are born again. We do not have to feel the pressure to be a “perfect” Christian because we accept that we are sinful by nature and know we will be forgiven when we repent and turn from our sins – past, present and future. We don’t have to perform for God to love us, but out of our love for Him we choose a life of obedience to His commands. We do not have to fear death and eternal separation from our Father because the Word promises that through our salvation we will spend eternity with Him in heaven. We don’t have to live like a prisoner bound by the power of sin because we are free through the power of God. Tim McGraw sang we should live like we’re dying but I say it’s much better to live like Jesus lived, glorifying the Father by living victoriously over sin. How much better would our lives be if we all lived like we really believed that Jesus not only died for our sin, He overcame it!