One of my favorite TV shows in the 1980’s was the sitcom “Who’s the Boss”. As the title eludes, the show was about the clear role reversal of the two lead characters, where a woman was the breadwinner and a man (who was her live-in housekeeper) stayed at home and took care of the domestic duties. As their friendship and trust in each other grew and the lines became crossed, there was an underlying tension between the two of them of who was really in control of the decision-making in the home.

We live in a world that constantly attempts to remind us through all forms of media that we are in control of our lives. That we are the ones with the power to direct our path in life. Actress Drew Barrymore once said “I don’t want to sit around and hope good things happen. I want to make them happen.” She clearly believes she is the one who ultimately determines the outcome of her life. We all have seen or experienced marriages in which husbands and wives fight for control of each other. Or parents who try both successfully and unsuccessfully to control their children. In the workplace and in the school classrooms it’s sometimes hard to tell who’s in control. And while it’s true that we are, for the most part, in control of the choices we make, it is in those choices that we are ultimately giving up control. We falsely believe that because we are free to make our own choices then that means we are in control of our lives. There are much bigger forces at play and much more at stake than we realize.

I am a self confessed control freak. I get it when people tell me it’s hard to give up control and to trust in someone else to guide their decisions. I was one of those people who held on to control of all areas of my life (my marriage, my work, my money) even as I was watching them all slowly spiral out of control. People who were far wiser than I ever will be told me to surrender control of my life to God. To trust in Him to “fix” all the areas of my life I was incapable of fixing myself, as long as I was relying on my own strength and abilities. I held on tight-fisted to control until I almost lost it all. I believed that I knew what was best for my life and thought “how in the world can I just release all this to God? It’s too hard!” Even though I believed that I was the one in control and that the choices were either “I’m the boss” or “God’s the boss”, the truth was that I was never in control. Either I was going to surrender and allow God to be in control or I was going to continue to give into my own desires and allow the enemy of God to be in control. We are extremely deceived if we believe we are ever truly in control. 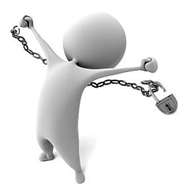 It isn’t easy and I use the present tense because it is a daily surrender to the desires of my heart and of my flesh. But thankfully I don’t have to rely any longer on my own strength or on my own abilities to do so. And I now know that God’s ways are always better than my own. I made the choice about 15 years ago to surrender my life to Jesus Christ, to relinquish the burden of control to Him. And since that time I have learned that what our world would perceive as weakness was the single-most freeing thing I’ve ever done. I believed the lie that freedom was found in being in control of my own life and on not relying on anyone but myself to make the decisions that affected my destiny. But the truth was that I was enslaved to my need to be in control. (Gal. 5:1) Now, I no longer have to carry the burden of trying to fix everything, do everything, be everything or know everything. I have the joy of experiencing freedom from being in control – yes freedom from not freedom in being in control. It is bondage to hang on to the belief that you are in control of your life. (1Kings 18:21). Remember, either you have surrendered to God and He’s in control or you’ve surrendered to your own desires and the enemy is in control. So, who’s your boss?